This place had very VERY good food. If you’ve ever had Korean BBQ here in the States, you can understand a bit of what I’m talking about. I gotta be honest. I really didn’t have high expectations, and was delighted to be wrong!

I caught these photos of these basics at the market. 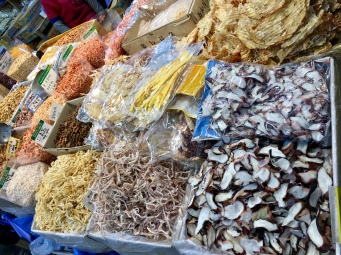 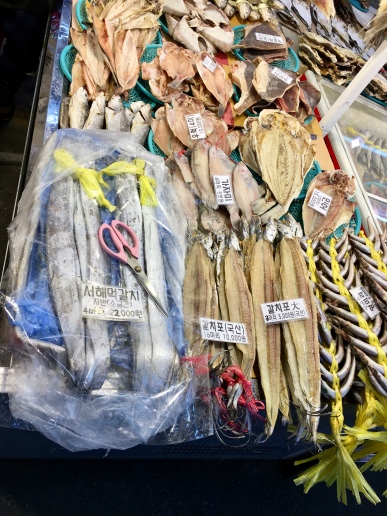 Korean BBQ is fun, too. They bring the hot coals to your table, cook the beef (chicken, seafood, whatever!) in front of you… They also bring an impressive number of side dishes that range from tofu to pickles and of course, kimchee. I had never had kimchee before, and was addicted! Think spicy sauerkraut. Yum!

Soju. Ummm… not my favorite. It’s a distilled beverage made from rice and sometimes other starches. Usually eaten with BBQ and consumed ‘neat’ like sake. I also found that most of the wine available was quite sweet, so I stuck with beer generally. I liked Hite. A bit like Korea’s bud. Surprisingly refreshing with the heavy meats.

Noodles are everywhere! They had a virtual plethora of choices when it came to noodles. Even the local convenience store was stocked up!

Spicy is kinda my thing, and I was on the hunt for a large bowl of very spicy noodle soup. Seoul did not disappoint. Seafood soup is very popular with the locals, but I went for this mushroom and tofu bowl in Bukchon Hanok village, because I loooooove that deep red broth. I was literally sweating and had to keep wiping my nose. Perfect!

It was 15F that day, and this really hit the spot. By the time I got back to the hotel, I had walked 14.5 miles since 9 am. I guess I went a little overboard, because I was too tired for dinner and crashed early to be rested for work the next day!

Seoul was a mixing pot of different kinds of food. Itaewon is Seoul’s International Area. They have every kind of food available all in one area. Everything from traditional Korean fare to Thai, tacos and pizza! This area is a bit more westernized to cater to the U.S. military personnel located very near there. We found an Irish pub full of ex-pats full of advise on what to see and do during our visit!

One evening we found our way into Seorae Village, the French Area of Seoul, located near Gangnam (The Beverly Hills of Seoul – It’s not just a kpop hit!) We met our local friend, Sang, at Saint Augustin Restaurant for Thai food. My favorite had to be the soft shell crab in curry sauce. When I go back to Seoul, I will make this a repeat destination. Too good.

Did you know that Seoul has an amazing Jazz Scene? One of the traveling companions went to high school in Seoul, when his father was working as a diplomat there. He’s a musical guy, and called up an former band friend. Turns out he now teaches music as Seoul University! He hooked us up with tickets to a show in a below-the-street wine bar in Seorae Village, called Pinot.

The wine was mostly western and very good. We grabbed a lovely bottle of Malbec (or two) and sat back to enjoy the show.

I can’t explain how good this was. The Han Sangwon Band is a conglomeration of students from Seoul University’s music school. They compete each year to be in the band, perform gigs all year together, and dissolve the band after the school year. Then, they start up again with a new cast the next school year. They seriously rock!

This is just a snippet of their performance of Bobby McGee. The vocalists are all incredibly talented. Sang’s guitar is HOT!, and I honestly do not think I could actually move my fingers as fast as the keyboardist does, let alone hit all the right keys at the same time! All while wearing Chucks! Truly talented.

Jazz night was easily my favorite evening adventure in Seoul. If you’re a music lover, you won’t want to miss all that Seoul has to offer.

TIP: You, too, can catch the Han Sangwon Band at All That Jazz on the first Saturday of every month. You might try Once in a Blue Moon for musical enjoyment as well. Check out this post of the best live music in Seoul.

Thanks for sticking with me for Part II! You can check out Part I of 10 Days in Asia: Seoul, South Korea here.

Question of the Day?

What was your favorite adventure in Seoul? What should I see next time?

Hi! I’m Shar, a recreational lifestyle blogger living in the Pacific Northwest. Cookbooks and a Suitcase follows my adventures in food, wine, books, travel, and fitness in this amazing life.